Pie Hacking: How to Deal With Competition 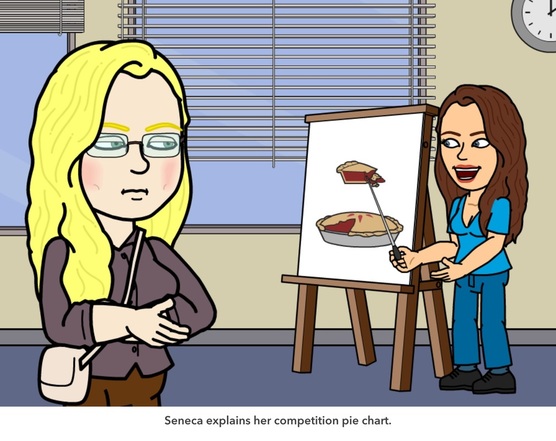 There’s been a lot of stuff about the competition hanging in the air lately. It’s in the Dream Ventures class, it’s in my personal dealings, friends are talking, it’s gross. Some lady actually asked me to stop running Freedom Flowers ads. Can you believe that?

Said it was costing her clients and that they think I can magically solve all their problems. “Pie in the sky” and the implication was that I was some sort of hack and if I really care about people I’ll back off.

My feelings about that are so scrambled. I’m happy I have that much impact that someone sees me as a threat, little power trip to the head. Sad that she feels that way and dumbfounded that you can just go to your competitor and ask them to ease off. Seriously?

Any negativity towards 'the competition' is scarcity mentality.

It’s not living the abundant life. It’s this idea that there are only so many customers to go around and you compete for your slice of the pie.

Maybe you see other companies taking big ol slices of the pie and in your mind, you know how geometry works and that you’ll be left with a sliver. But business is not geometry. Especially when the God who has been known to multiply food groups is in it.

I’m not interested in stealing this lady’s piece of pie, I’m interested in expanding the number of people who are getting healing. Anytime she or I or anyone else doing similar work put our business out there, teach, inform, sell or advertise, we are making a bigger pie. It takes people hearing things from a few sources before they get it and make a decision. Something she said may have primed the pump for me and I’m sure my book readers, subscribers and mini-course takers wind up at competitors as well. I think it’s called reaping where you didn’t sow.

To feel reasonably secure around competition, you have to know that you are special. Nobody else does exactly what you do, exactly like you do it. There are people who will gravitate to you for that reason and people you will simultaneously repel. And that has to be ok.

Your business is probably about helping people in some way and you make money doing that. That at least describes everybody in the Dream Ventures class. Your business makes a positive difference for people. That will also be true of your competitors, correct? Still want to “destroy the competition?”

What I’m suggesting then, is that you don’t beat them, you join them. Get to know them, help them out even. If they get way busy, they might send people your way. A competitor approached me when I was just getting started and she was weirdly nice to me. Linked to my website from hers even. Then I got an opportunity for an interview on a radio show. After I got the details of what they were all about, I realized she was actually a much better fit for what they wanted. I let them know about her and they decided to have both of us on at different times. When I launch something new, she promotes it to her entire mailing list. It doesn’t have to be ugly.

I had a dream two nights ago where I was in charge of a group of people and I gave them pie milkshakes. While the pie shakes were keeping them occupied, I was cobbling together a very large, mixed berry pie. Meanwhile, Jesus was installing a refrigerated pie display case.

I’m pretty sure this group is the Dream Ventures class and the milkshake might be some elementary teaching blended up so they are not focused on each other’s slice. I have a few ideas on what that bigger pie with mixed fruit and display case may translate to in reality, but really trying to wait and listen right now.

In the meantime, here’s how to hack your current pie situation.

In case you were wondering, I did work something out with the lady who was calling me a client thief. And today, I noticed a much more established competitor signed up for my mini-course. They do not need the course, they are spying. There is an entire industry built around keeping tabs on competitors. It seems like an absolute waste of time and energy to me, but this is a now situation that I may have to monitor and stand ready with a cease and desist notice. Spy vs spy.